Before we get to our curriculum below. As you may or may not know, our sister animation company (Newton Animations) has developed a suite of games to the HTC Vive virtual reality platform. We often customize the games we’ve developed (pictured below) with our customer’s name, message, brand and/or logo. These are very popular at corporate holiday parties, weddings and especially bar/bat mitzvahs (KIDS LOVE THEM). Students enrolled in our 3D for VR & AR Camp will all get a copy of these games developed by Newton Animations. For a little fun, if there is time, students may even add their own assets with their name. It’s jaw dropping cool. 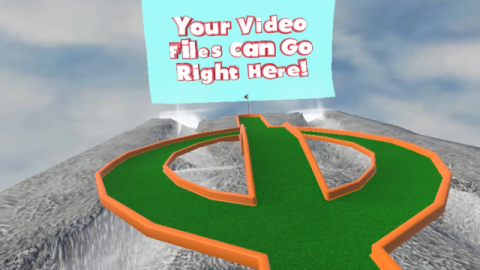 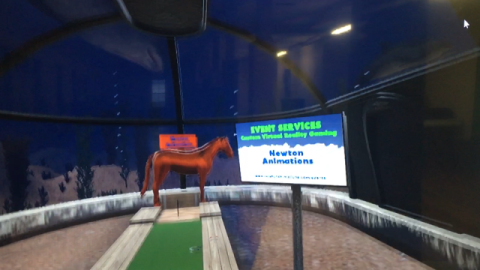 In this class students will learn how to design a simple yet working and fully functional bowling alley inside of Cinema 4D. Students will then upload their bowling projects into Unity (Unity is a free developer tool). Unity is, hands down, today’s game engine of choice by any game developer. Students will be introduced to the Unity editor and very basic programming techniques using basic C # (called C sharp). This is the process that recognizes game controller inputs and creates the game experience (using assets created via a 3D program like Cinema 4D). Students will use tools to pick up one of the three bowling balls they created in Cinema 4D. They will use the same tool to “virtually” roll the bowling ball down the alley towards the bowling pins. We will also show them how to code the game to clear any pins they missed after their third try. We will also show them how to code a light going on and off (to let the user know when it is OK to throw the next bowling ball). For a little fun we will poll the students to determine a couple of other fun attributes of our game. For example last summer students created a sign that opened when a user threw a ball into the gutter missing all pins. We will leave it to you as to what the sign said. It was a fun exercise. Polling the group leads to great ideas.

We will also provide an introduction to motion capture and facial tracking technology from Perception Neuron for the HTC Vive as well. Lastly, we will show them how the Unity editor publishes three dimensional objects as a hologram (or augmented reality). For a little fun, students will be provided ample opportunity to play with our extensive library of games for the HTC Vive and Hololens technologies.

Students will also use our extensive library of virtual reality & holographic games and other experiences to get an idea of what today’s game designers create…and how a game or experience reacts to an input (technically called an event listener such as a click or scroll). Students will also learn the vast differences between virtual & augmented (or holographic) realities. Augmented reality is a remarkable experience but still in its infancy and as such quite limited in inputs (or event listeners). We use the Unity driver for both virtual & augmented reality gaming.

This course is available to students aged 13 to 18.

Remember this is a different summer program than our Virtual Reality Fantasy Camp. In our Virtual Reality Fantasy Camp kids have a blast experiencing the most advanced gaming in the world…with zero expectation of learning. In this our 3D for Virtual & Augmented Reality Camp it is one of our more traditional learning programs (and just as fun). Last year both programs were enormous successes.